Yanski Lazny Resort is ideally located in a picturesque and historic mountain town, It is not only one of the best sanatoriums in the Czech Republic, But it’s also the best sports and entertainment center for this giant, Famous in the Kirkunosh Mountains, In winter you can enjoy clean and picturesque local views. Air and winter enthusiasts can enjoy snow, Cyclists and hikers can also enjoy the beauty and splendour of spring and autumn. That’s why you can find guests at Yanski Laszny Resort all year round.

Yanski Lazny Sanatorium is the only sanatorium in the Czech Republic located in the Krkonosh mountain range stretching to the foot of Serna Hora at an altitude of more than 600 meters. Located 11 km from Trutnov and 8 km from Pets pod Sneczka (here is the highest peak in the Czech Republic, Sneczka height 1603 meters).

Yanski Lazny Resort is one of the oldest spas in the Czech Republic. Yanski Lazny Resort got its name from the hot therapeutic mineral water that flows from there. A hot spring was discovered in 1006 and according to history, The spring was named after his discoverer, Jan Zeman is a Nabil Zhukov. In the 17th century, The owner of the area (Jan Adolph I) put Prince Schwarzenberg, The foundation of the spa. For the same period, the oldest medical report mentions Yanski Lazni’s sanatorium.
Prince Edolf Schwarzenberg took over the Yanski Lazni area in 1675 and the prince contributed greatly to the spa’s development. He built the resort’s first buildings around mineral water and commissioned local physicist GH Hetmayer to write a scientific message about mineral water. in the early 20th century, Sanatoriums seem to have contributed through successful treatment of world-renowned polio as well as modern analysis of local springs. As the analysis of water in the Yansmi Lazni sanatorium proved, It is similar to springs in the city of Tumor Springs in the United States of America itself, where U.S. President Roosevelt completed the processing of the Yanski Lazney Resort and became the first spa of its kind in Europe. The sanatorium continues to succeed with expertise, quality and the preservation of traditions today. 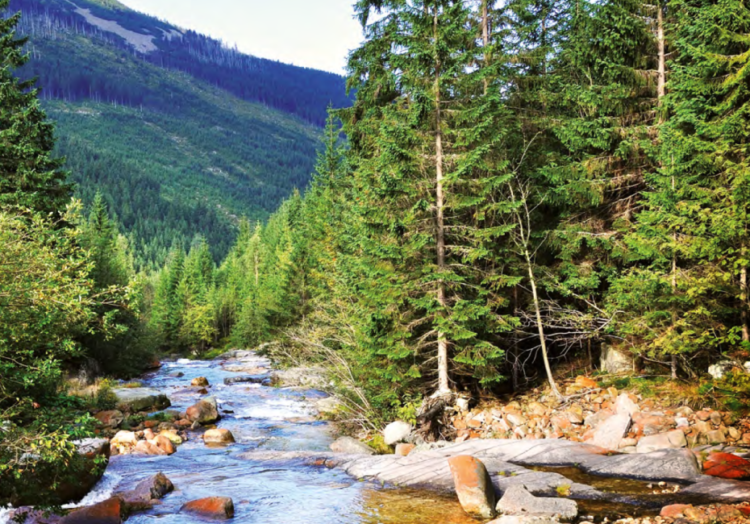 Based on isotope analysis, Yanski Lazni Health’s physiotherapy resources are estimated to be 6,760 years old.

Water is used as a natural source of healing at Yanski Lazni Resort, All spas provide mineral water and provide customers with a therapeutic pool and jacuzzi. Hot water is transported through metal pipes to Children’s Hospital tanks (Vesna) and used to fill the resort’s swimming pools and snorkels as well as all the resort facilities and hydrotherapy.

Local climate is a therapeutic element that supports physiotherapy for the treatment of chronic diseases and respiratory diseases, including asthma and chest allergy. The positive impact of the local climate is mainly due to the diversity of the terrain, making it possible to live in a sanatorium with sunny summers and cold winters, low relative humidity and saturated with water steam, Thanks to the intersection of mountain currents.

Another important element is plants: The plants and trees that grow in the national reserve “Kirkunosh” are considered depending on the different climatic seasons, Because nature and the local climate allow the inhalation of natural materials of local smell both from coniferous trees. conifers, Especially fir trees, Or the lawns of medicinal plants in the mountains of the natural “Kirkunosh” reserve.

What to know about tourism and leisure within Yanski Lazni Resort?

Yanski Lazny Resort is located in the giant mountain area, It is the highest mountain range not only in the Czech Republic but also in the entire Central Europe north of the Alps. The main highlands of Kirkunosh are connected to the hills by cable car, So you can enjoy nature even in hard-to-reach areas. The famous city of Yanski Lazni features a modern Cherny Horse Express cable car, Each has eight seats. You can ride straight from the urban area to the top of Mount Cherny Hori at 1299 meters, Access to the starting point for hiking along the mountain and the Kirkunosh National Nature Reserve.

World of Skiing for Applicants and Beginners

Yanski Lazny Resort is the most famous and largest winter ski resort in the Czech Republic, With full service facilities. One of the ski lanes has slopes of 50 kilometers and leads to five areas, Ranging from short ski lanes to three kilometres of ski lanes directly from Mount Cherny Horry offers Formanke parks
Cherna Hora Leaf is a site for junior and child skiers, It is equipped with moving pull rugs and ropes. in addition to, You can also ski from the Chernikhuri Mountains for lots of winter fun.

Yanski Lazny Resort connects to BTS Pod Senchka Pets pod Sneška, So both are accessible by snowmobile and fast ski bus. There is also a modern Hove Manky X Press cable car, Capacity of 6 seats per unit, Providing comfort and security is the fastest cable car of its kind in the Czech Republic.

Winter sports have a rich and ancient history at Yanski Lazny Resort, Starting in the 1920s when a big ski jump was built here, It is the largest in the giant mountains of the time, 40 meters high. With Franz Wind record holder of Svoboda, He jumped 50 meters. 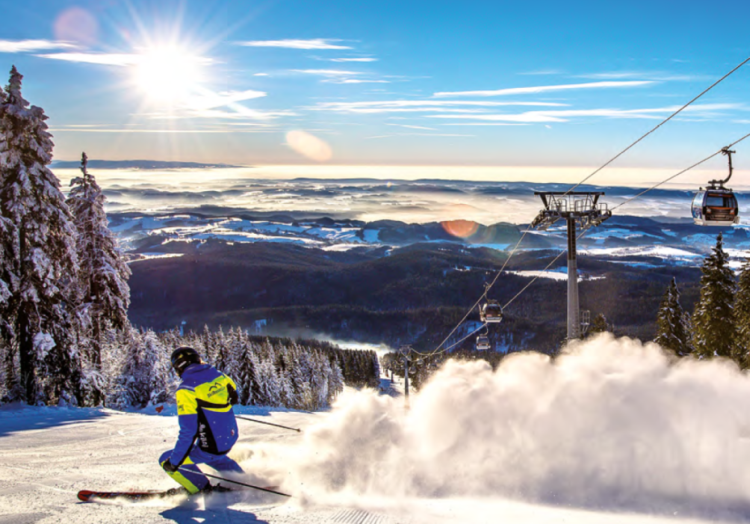 There are many great places around Yanski Lazni Resort that are worth exploring on foot or by bike. There are countless walking and cycling tracks of varying lengths and degrees of difficulty to enjoy the views. Thematic sites vary according to information boards and lounge areas.

The viewing tower was in Chernikhuri, which provides a unique panorama for the oceans, Originally a cable car column with a display platform 21 meters high and 106 degrees up. It will provide you with beautiful circular views of the Sanchka Wubud Kirkunosh Mountains, Nakhodska and Orlitskh and all areas ideal for hiking.
Yanski Lazny Resort’s new surprise is the umbrella – a 45-metre tall wooden tower located in the middle of the majestic forest of the Kirkunosh National Tree Reserve. . Among them is the pedestrian area about 1500 meters away. The views will put you in the middle of a diverse and unique forest. Great surprises await the tourists. You’ll learn about the uniqueness of the Giants, And you’ll be perfectly captivated by the view from the tower, Because of its height, You’ll see as if on hand the huge trees, Some of them are more than 150 years old. The lower level of the tower houses a unique educational center that displays information about the tree and its roots.

And in summer, Adrenaline addicts will be available to enjoy if they ride a dirt bike through the cable car park or make a trip to the slopes of Mount Cerny Horry.

At Yanski Lazny Resort, People of all ages can, From children to the elderly on trips to the near and far. Where you can enjoy archaeological and recreational areas in the Alpine Valley, And don’t forget the 66-hectare swamp of Mount Chernikhuri, which is estimated to be 6,000 years old.

Both young and old have the opportunity to exercise, There is a golf course with beautiful landscapes – the Mladybook area offers special sports activities for young people.

No matter when the year comes to Yanski Lazni Resort for treatment or relaxation you will never be bored or frustrated, With beneficial natural remedies, wonderful surroundings and historical monuments. What’s more you’ll be happy to return to visit Yanski Lazny Resort. 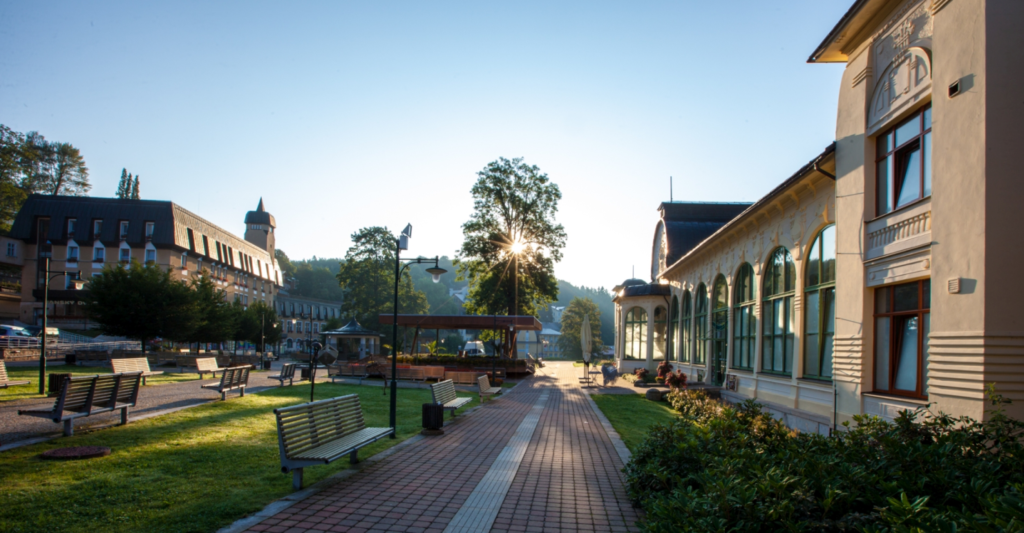