الرئيسية » The role of physical therapy in the treatment of stroke

The role of physical therapy in the treatment of stroke

Characterized by the role of physical therapy In the treatment of strokes and strokes, because it is very important, because strokes or strokes affect large numbers of sick people, and it is not possible to specify a specific age for those who suffer strokes, but it is one of the most difficult diseases that people face with soap and is also the most common disease in a large number of Countries, Therefore, it is necessary to go to the physiotherapist for guidance and knowledge of the instructions and what are the ways to be dealt with in this pathological condition. Therefore, the physiotherapist explains many important tips that benefit the patient and help in healing his health condition, in addition to his definition of the disease, what are the risks and fears of the disease and how to treat It is one of the most dangerous diseases that affect a large number of people in different countries of the world.

What is the role of physical therapy with patients with stroke? 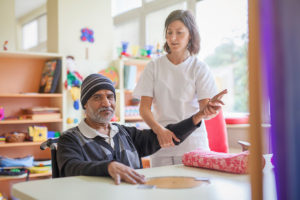 There are a large number of definitions of stroke or stroke, but some physiotherapists called stroke It is a blockage in some of the veins that supply the cells in the brain, but strokes occur in the event that the blood flow stops in these nourishing veins and thus due to blockage of the veins or due to a rupture in the weak veins that help nourish the brain and provide it with oxygen and other nutrients it needs and in this case bleeding occurs Because of the interruption of blood and oxygen supply to the brain, stroke is one of the most difficult diseases facing a large number of patients.

How to have a stroke?

The blood flows through the veins of the human body, but in the case of advancing age or in the event of an increase in the proportions of fats in the body and blood, In addition to the deposition of some types of deposits in the veins that nourish and supply the brain cells with food and oxygen, but in the case of an increase in the rate of fat and an increase in the rate of sedimentation in the blood and veins, then the body becomes blocked in the blood vessels leading to the brain and the person suffers stroke due to the blockage of these veins that deliver food and oxygen to the brain.

Strokes differ from one type to another, by classifying the pathological condition of the stroke sufferer. These types are:

The second type of stroke:

This type of clot occurs due to the occurrence of internal bleeding in the brain, due to the weakness of the veins connecting the brain.
This is in the case of rupture of weak veins due to pressure or if the veins burst in the brain.
And also this disease can be infected due to the presence of a knot in a specific area in the veins
As the brain cells compress, this ganglion causes great damage to the brain cells, and this type of clot is the most difficult.
This is because it has a lot of damage in the event of infection, and therefore care must be taken to detect early in the event of any symptoms of a stroke and to go directly to the doctor and physiotherapist to raise awareness, treat the disease and prevent it in the event that the accompanying symptoms are simple and do not affect and can be treated.

Where studies and research conducted by specialists and physiotherapy experts have shown that most of the number of stroke sufferers are due to cases of obstruction of the veins leading to the brain, and this percentage reached 80% of stroke sufferers for this reason. The beginning of the matter in the event of the appearance of symptoms associated with the clot.

Symptoms associated with a stroke:

The case of a stroke results in the appearance of some accompanying symptoms, but these symptoms differ from one case to another, due to the area or location of the clot, where the symptoms differ due to the different location of the stroke, Where the right fissure clots differ in their symptoms from the left fissure clots in the brain, and through these symptoms, the patient’s pathological condition can be determined and what is the area in which the clot occurred, And whether the stroke occurred in the anterior or posterior region of the brain or in the brain. One of the symptoms associated with a stroke is a feeling of difficulty in pointing letters and words, or numbness in one of the body’s organs, or a feeling of dizziness and dizziness.

There are some other symptoms that affect the body due to this pathology, which are weak eyesight and lack of vision, but sometimes double vision is doubled with the injury of one of the other senses, which suffers from weakness in its natural function. Other senses are also affected, including smell, symptoms of tension or chronic headaches in addition to seizures. Epilepsy, which may sometimes occur due to a defect in the brain cells, the patient suffers from a chronic epileptic seizure.

The role of physical therapy in the treatment of strokes:

Physiotherapy is one of the most important means to be followed in cases of stroke, because it helps in the return of cells and organs to their normal function and the return of movement of organs through exercises and exercises performed by the physiotherapist for the patient, Where the physiotherapist focuses in his treatment on improving the functional, motor and psychological performance of the patient, because he works to help the body and help the patient in the speed of recovery in addition to his ability to strengthen the weak muscles of the body, where the physiotherapist also focuses on some of the upper parts of the body that are close to the area of the clot The physiotherapy improves the patient’s performance in movement and speech and helps him return to normal life and practice his usual activities as before.

But the role of the physiotherapist is not limited to some exercises or movements that the patient is treated with.
But the physiotherapist is responsible for evaluating the patient’s pathological condition.
He is also primarily responsible for the state of recovery from the disease.
This is because physical therapy is the first influence on recovery from these diseases.
The physiotherapist must guide the patient and his family on how to deal with the case at home.
In addition, it offers many different ways and means by which the patient’s condition can be improved.
And that through the use of exercise or the use of some electrical waves in some cases.
Or use wax and many other means.
In addition to some devices and tools for physical therapy.
Therefore, the specialist is keen to implement all means in the correct manner to return the patient to his normal, normal life.
Therefore, physical therapy is the right choice in this case.

Full details about the Darkov Clinic for Physiotherapy in the Czech RepublicThe role of physical therapy in the treatment of stroke#Physicaltreatment in #Czech#best _ medical _ clinics#Darkoff _ clinic for the treatment of the musculoskeletal and nervous system.Send a letter of acceptance and invitation to work for the visa for free#Czech_sanatoriums #Czech_Prague #Teplicehttps://www.healthback.net/%d9%85%d8%b5%d8%ad%d9%87-%d8…/